Wrecking Ball is a free Lightroom preset that gives images a dark and grungy look. It lowers the intensity of colors to produce industrial tones that are metallic yet muted. The vintage film look adds to the overall abandoned feel.

Contents hide
Sets an Industrial Look and Feel
Creates a Metallic Look by Lowering Saturation and Vibrance
Darkens Tones for a Dramatic Effect
Produces Crisp and Grungy Details
Wrecking Ball is for Lightroom Mobile, Desktop, and…

You can use this preset on images of abandoned urban spaces, or any other scene that calls for flat dark tones and gritty textures. It looks great on both indoor and outdoor photos. Wrecking Ball preset is also great as an Instagram filter, especially if you want to give a set of photos a consistent style.

Sets an Industrial Look and Feel 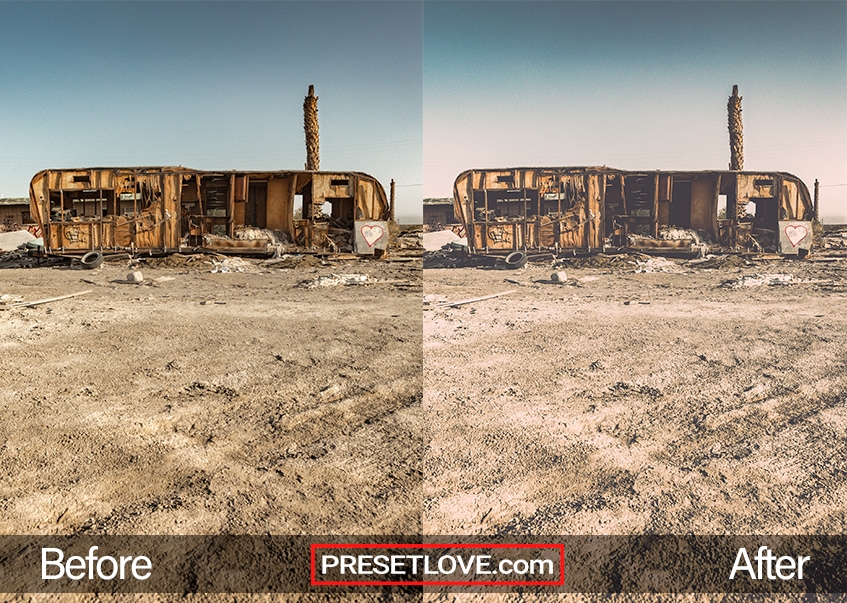 Industrial Fade. The preset sets its unique look by customizing the RGB channels using the tone curve. This determines how it generally processes colors. It also accentuates them by adding warm brown tones to highlights and light blue to shadows. When these effects blend, they create the analog film aesthetic that you can see in the above example.

Wrecking Ball optimizes light and contrast as well to make sure that the tones come out as much as possible. It, therefore, increases exposure to fill the image with more light and boosts contrast for maximum definition. Its high-contrast style helps set the grungy look. The preset then refines it further using more complex tonal adjustments.

Creates a Metallic Look by Lowering Saturation and Vibrance 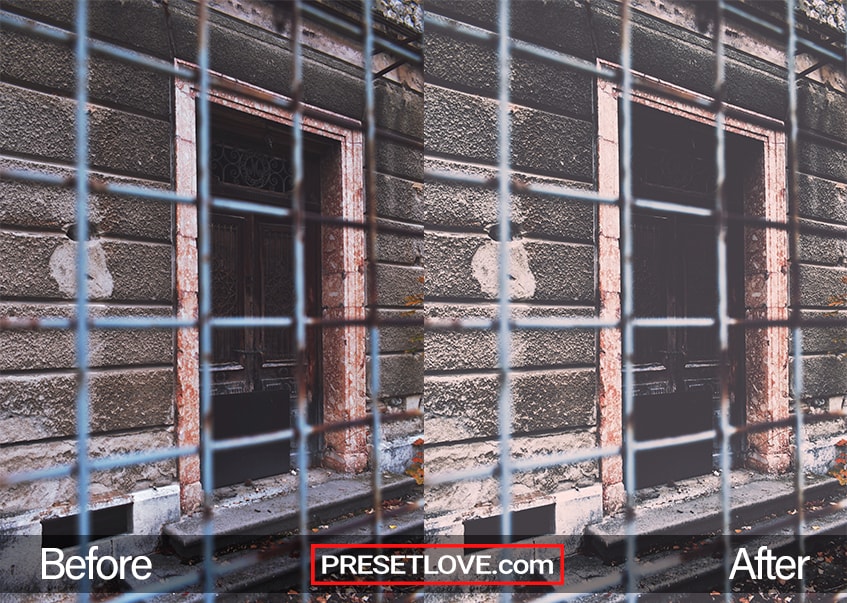 Muted Colors. Unlike most industrial presets, Wrecking Ball has understated hues and tones. After all, it combines the nostalgic feel of retro films and the crisp textures of the modern grunge style — these produce the old and abandoned feel. The resulting atmosphere is subdued but compelling.

The preset creates this look by lowering the levels of both saturation and vibrance. As a result, images appear less colorful; all hues are pulled closer to gray tones. As you can tell from the After photo above, this makes scenes appear more metallic and eerie.

Darkens Tones for a Dramatic Effect 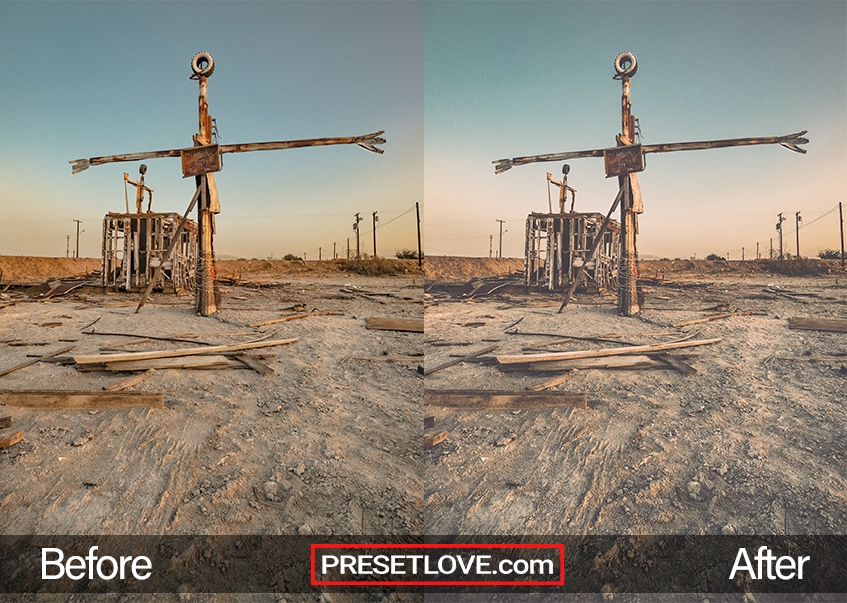 Dark Grays. Wrecking Ball preset produces complex tones that add to the overall motif. To create this, it darkens light and dark regions using the tone sliders and curve. It only moderates the intensity of highlights and shadows to make sure that details remain visible. As you can observe from the After photo, the preset does not produce overblown or harsh tones.

Try to observe the differences in tone above. Compare the shadows, the bright tones of the horizon, the blue sky, and the coarse ground. Also notice how Wrecking Ball creates the detailed matte effect that we often see in vintage films. 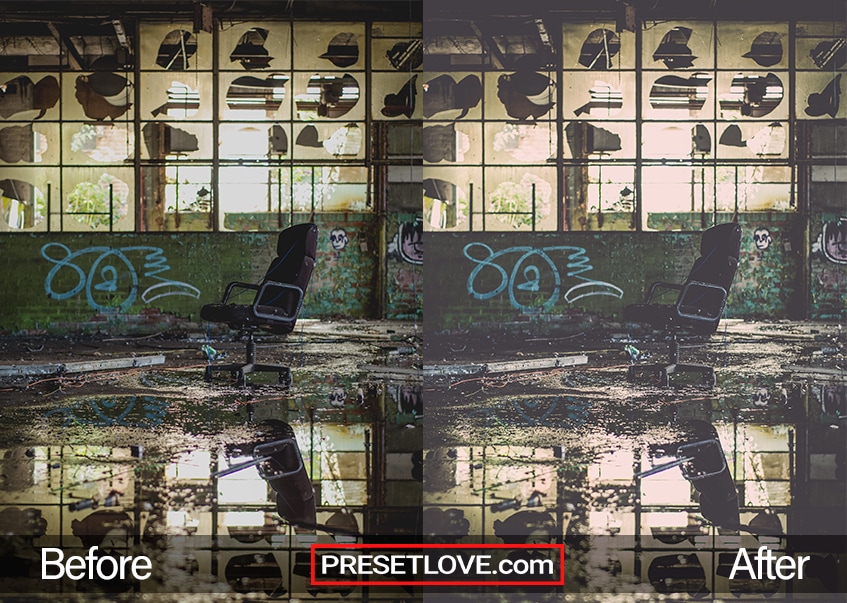 Try to observe how these two tweaks go hand in hand in maximizing details in a photograph. Both of these make sure that, even with the muted tones, the image would not look washed out or flat. In the After photo above, pay attention to the reflection in the puddle, the gritty flooring, the vandalized wall, and the broken windows.

Wrecking Ball is for Lightroom Mobile, Desktop, and…

You can absolutely use Wrecking Ball preset as is, right out of the box. With any preset, you might need to make adjustments to accommodate your specific camera, settings, lighting, and subject matter. If you want more dark and industrial presets, be sure to view our entire collection here. 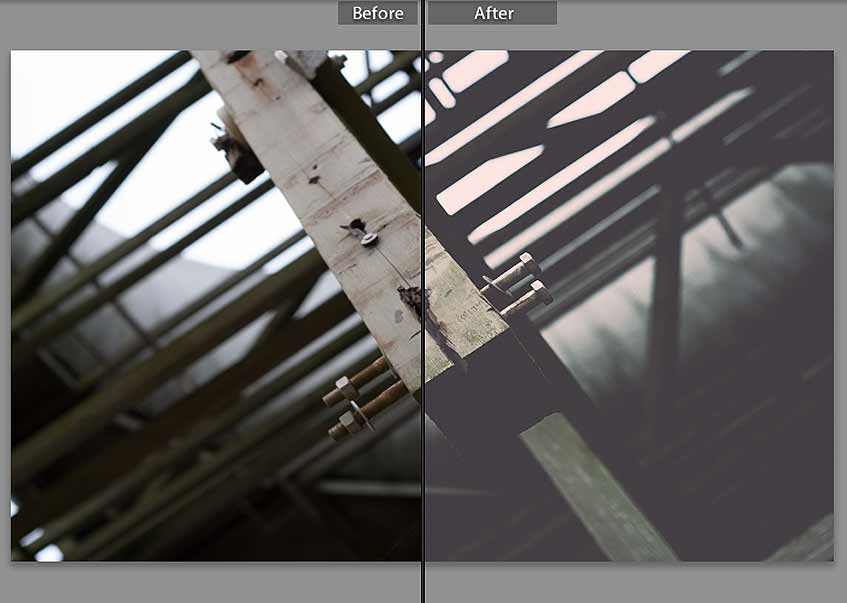 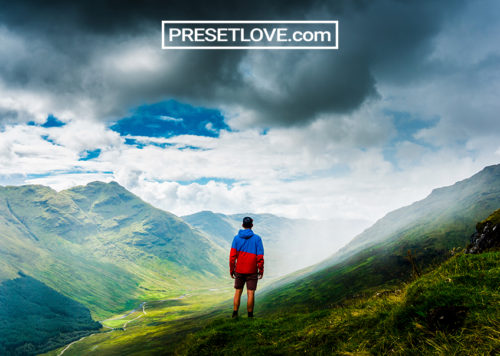 Download Free Get our 300+ Preset Bundle! Rain Clouds is a free Lightroom preset that adds a dark and mysterious... 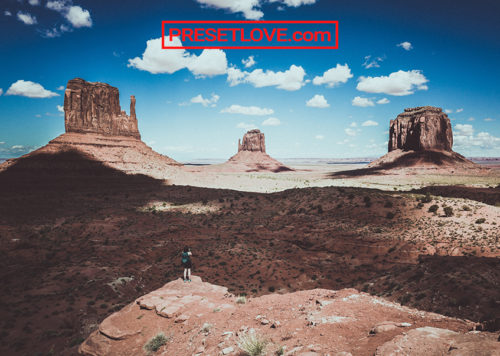 Download Free Get our 300+ Preset Bundle! Utah is a free Lightroom preset that enhances landscape elements and applies beautiful... 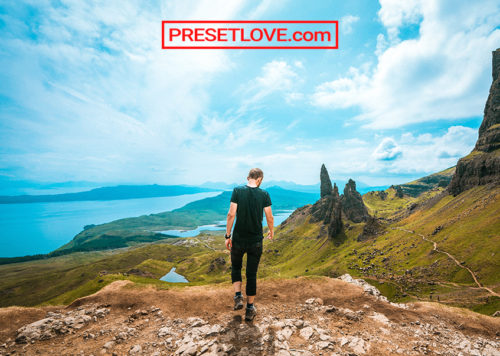